Types of companies in Brazil

About 4 million companies are registered in Brazil. Discover more.

The Southeastern region of Brazil has 48.3% of the registered companies. 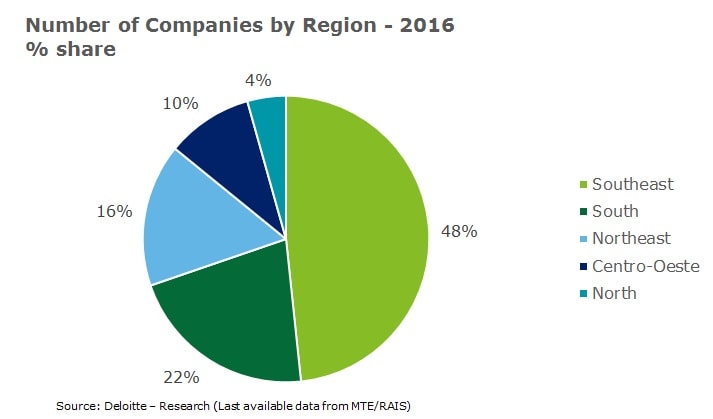 The Limited Liability Companies (“Limitadas” or “Ltda.”) are regulated by the new Brazilian Civil Code (Law 10.406/02) and is the most common type of legal entities incorporated under the Brazilian Corporate law. Such, is the form that most closely resembles US LLCs.

A “Limitada” is incorporated through an Articles of Association, which must be duly registered before the Board of Trade. Such, must contain at least two quotaholder, resident or nonresident, with no minimum or maximum percentage of interest ownership, (i.e., one quotaholder can hold 1 (one) quota equivalent to 0.1% and the remainder of the quotas (99.99%) may be held by the second quotaholder). Nonresident quotaholders must be represented by an individual resident in Brazil.

In general, a “Limitada” has less legal formalities than a corporation and no financial statements must be published in official gazettes or major private newspapers. Also, “Limitadas” rarely reveal basic financial information, such as operating expenses or year-end profits.

Notwithstanding to the above mentioned, there is no mandatory independent statutory-audit in a “Ltda”, unless the legal entity qualifies under the “Super Limitada” threshold. Under such concept, local financial statements of the Brazilian entity may be subject to a statutory accounting audit if book value of assets is higher than R$240 million, or gross revenue in excess of R$300 million/year. Such thresholds are based on the Brazilian entity’s previous year’s financial statements applicable to a group of companies under the same controlling parent, and whose combined assets or revenues reach the prescribed threshold.

Considering that as per the Brazilian legislation only Public Trade Corporations can be registered in the stock exchange or have its quotas publicly traded. In this sense, “Ltda” cannot be registered or sell its quotas in the stock exchange. Finally, it is important to mention that the effective control of the “Ltda.” is exercised by the quotaholder representing 75% (or more) of the quotas and as a rule a member may not sell its quota without the consent of the other quotaholders.

The Limited Liability Corporations (S/A) are regulated by the Federal Law No. 6,404/76 (“Lei das SAs”). The Brazilian corporation is the form that most closely resembles US subchapter C corps. Corporations are allowed to issue different classes of shares, such as voting and non-voting shares. The shareholders liability is limited to the payment of the shares to which the shareholders have subscribed. Foreign shareholders must have legal representatives in Brazil.

This type of entity is usually suited for large businesses’ seeking to obtain funds from the general public. Like the Limitada, the S.A must have at least two shareholders which may be individuals and/or legal entities (resident or non-resident).

The Corporate Capital of the Corporation must be totally subscribed and at least 10%, of the subscribed capital must be deposited in a bank in order to incorporate such type of entity. Such can be paid in cash or in kind (the latter must be appraised by shareholders after appraisal by three experts or by a specialized firm appointed by the shareholders). Also, At least 5% of annual net income must be set aside in a legal reserve until it reaches 20% of capital.

Publicly traded corporations are subject to specific regulations of the Brazilian Securities Commission (“Comissão de Valores Mobiliários – CVM”) in addition to the provisions of the Corporation Law, now IFRS, as well as independent statutory audit.

Corporations are required to file their financial statements with the local commercial registry and publish them in the Official Gazette, as well as in a major private newspaper. In addition, the Securities Commission may require publication in the localities where open corporations trade their securities.

Silent partnership is an unincorporated organization by virtue of which two or more members carry on a trade, business, financial operation or venture and divide its profits. This type of structure is chiefly noted in real estate, reforestation projects and hotel pooling (flats and residence condominiums) and does not normally apply to other activities.

The SCP’s has a determined object and due to such the duration of the company will be for a determined period, aiming the execution of the determined operation. Under this organization, a member is assigned as the “ostensible partner”, being in charge of the partnership’s management and carrying out its operations under his own name accordingly. The ostensible partner is held responsible, joint and unlimitedly, for the partnership’s liabilities before third parties.

Although this structure does not constitute a corporate entity as such, Federal Tax Authorities regard the SCP’s as taxpayers for tax purposes. As a result, tax legislation considers that SCPs are equivalent to corporate entities for purposes of Income Tax.

Accordingly, the norms applicable to other corporate entities apply in calculating their results, as well as taxation of profits.

The definition of a consortium under Brazilian legislation is provided by Federal Law 6,404/76, which determines that “the corporations or any other companies, under the same control or not, may form a consortium to perform a specific operation or activity”, since the requirements necessary are met. The Brazilian legislation defines the consortium as an unincorporated entity, by virtue of which two or more partners intend to carry on a trade, business, financial operation, or venture and share its profits. It states that the consortium agreement does not imply in joint liability of its partners, being each one responsible only for their own obligations, according to the provisions of respective consortium agreement.

The consortium agreement shall determine with more detail the organization role of each consortium and providing the obligations and rights of each partner in order to carry on a certain enterprise.

Moreover, the consortium agreement must be filed with the local Board of Trade (“Junta Comercial”) located in the same jurisdiction of its main office, together with occasional changes thereto, remarking that corresponding file certificate must be published by the parties. From a tax standpoint, since the consortium does not constitute a corporate entity as such, it is not regarded as a taxpayer for income tax purposes and, consequently, should not be subject to the requirements to comply with principal and accessory tax obligations, unless otherwise provided in tax law.

Law 12.441/12 amended the Brazilian Civil Code introducing the so called “Empresa Individual de Responsabilidade Limitada” – EIRELI which is mostly used by an individual entrepreneurs. The EIRELI can be incorporated by a single individual shareholder that holds 100% of the paid-in capital (with a minimum of 100 times the current minimum wage). The EIRELI follows the same rules as the Limitada in terms of responsibility of the shareholder.

Branch of a Foreign Corporation

A company may organize as a branch in Brazil. However, unless there is a substantial tax advantage in the investor’s home country (such as deduction of exchange losses from the taxable income of the head office), the disadvantages of a branch probably outweigh the benefits. It is more difficult to establish a branch, which takes about six months, and the establishment costs are nearly the same as for other business forms. Remittances of profits, including those of a branch, are exempt from withholding tax.

Establishing a branch of a foreign company requires a special authorization issued by the Ministry of Development, Industry and Trade (MDIC). Historically this authorization has been issued on an exception basis. The firm must operate in Brazil under the same name as in the country of origin (it may add the words do Brasil or para o Brasil), and it must retain a permanent, fully responsible representative (of no particular nationality), whose name must be registered.

To obtain the necessary government authorization, a foreign company must submit documentary evidence of its legal existence, a copy of the articles of incorporation, a list of shareholders, its most recent balance sheet and a copy of the resolution to open a branch in Brazil. The firm must allocate a certain amount of capital to the branch and as noted above appoint a legal representative. All documents must be properly notarized, certified by a Brazilian consul and officially translated.

A branch may not function until it has been registered and its authorization and documentary evidence are published in the Diário Oficial and a local newspaper. It must maintain accounts similar to those of an SA and, depending on the bylaws and/or laws of its country of origin, it must publish in Brazil corporate documents, other than its annual financial statements. No annual meeting is required.

A branch in Brazil is taxed at the same rate as a Brazilian company.